It starts with a hug: Regence and Mary's Place 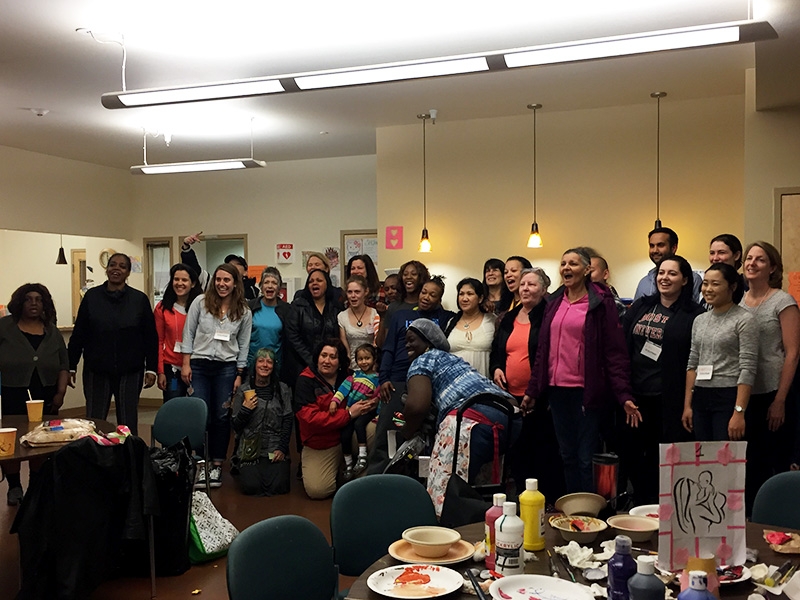 Regence supports Mary’s Place—a day center and family shelter that helps homeless women, children, and families get back on their feet and find their forever home. This is a guest post from Rob Goodman, a communications manager at Regence who recently visited Mary's Place.

I had never visited a homeless shelter and I was feeling both excited and anxious as I walked into Mary’s Place, which is located in downtown Seattle and is a day center for single women experiencing homelessness. As I entered the facility, I was surprised by the amount of activity going on. A few people were checking in at the front desk, many others were sitting at the tables near the kitchen getting their first meal of the day, while others were simply talking amongst themselves. In the midst of it all, a karaoke machine was playing and a group of women, led by one incredible staff member, were belting out disco tunes that were helping to fill the room with laughter. Two young children were playing in the corner while their mother appeared to be taking a break from all that was going on around her.

Regence has been a supporter of Mary’s Place since 2015 and our funding has led to the development of a Health and Wellness Program that helps women and families set goals for better health and empowerment.

“Through Regence’s gift, we’re able to partner every woman with an advocate that helps them focus on achieving housing, employment, and wellness goals,” said the amazingly energetic executive director, Marty Hartman. “When we talk about achieving goals, we say ‘how are you going to take care of yourself or your family today?’ We’re proud that we can help them achieve their health goals thanks to the generosity of Regence.”

As I walked around the facility, I was struck most by the amount of hugging that was going on. As staff members moved throughout the crowded rooms, they always called the women by their first name and gave them hugs. Was this act of compassion merely a coincidence?

“At Mary’s Place we focus on building relationships, and relationships start by knowing a person’s name and giving them a hug,” said Marty. “When you’re homeless many times people don’t know your name. You get walked over, your bags get pushed aside, and you generally are ignored. At Mary’s Place we make it a point to learn your name because, once you enter the doors, you are part of a family. We’re here to remind everyone that they are special, that they matter, and that they are important. There’s no better way to demonstrate that feeling than by knowing a person’s name and by giving them a hug.”

As Marty walked around the day center, another theme became apparent. At Mary’s Place, every visitor is encouraged to assist other women, keep the facility and surrounding neighborhood clean, or help in the kitchen. But the bigger goal is for the women to work with the staff to help chart a path for a better life, and that starts with empowerment. Women who help out at the facility earn Power Points that they can redeem at Mary’s Marketplace.

“When women come through our doors, they quite often have nothing and are simply asking for help,” said Hartman. “By empowering them to become part of our community, we not only give them hope, we give them a path to self-reliance. Power Points are our currency and the women can use those points to select items in our Mary’s Marketplace. Items, which all come from donations, range from shampoo and perfume, to clothing and snacks. Earning Power Points by being part of our community sends a message to these women that they are worthy, they are capable, and we believe in them. Even after they find their forever home, they’re always welcome to come back and shop in the Mary’s Marketplace because they are part of our family.”

As I left the facility I took a moment to reflect on what I had experienced. I expected to see a large group of women who might be depressed, angry, and without hope. Quite the opposite was true. I was surrounded by women who were full of energy and it was clear that they all felt that they were part of the community that makes up Mary’s Place.