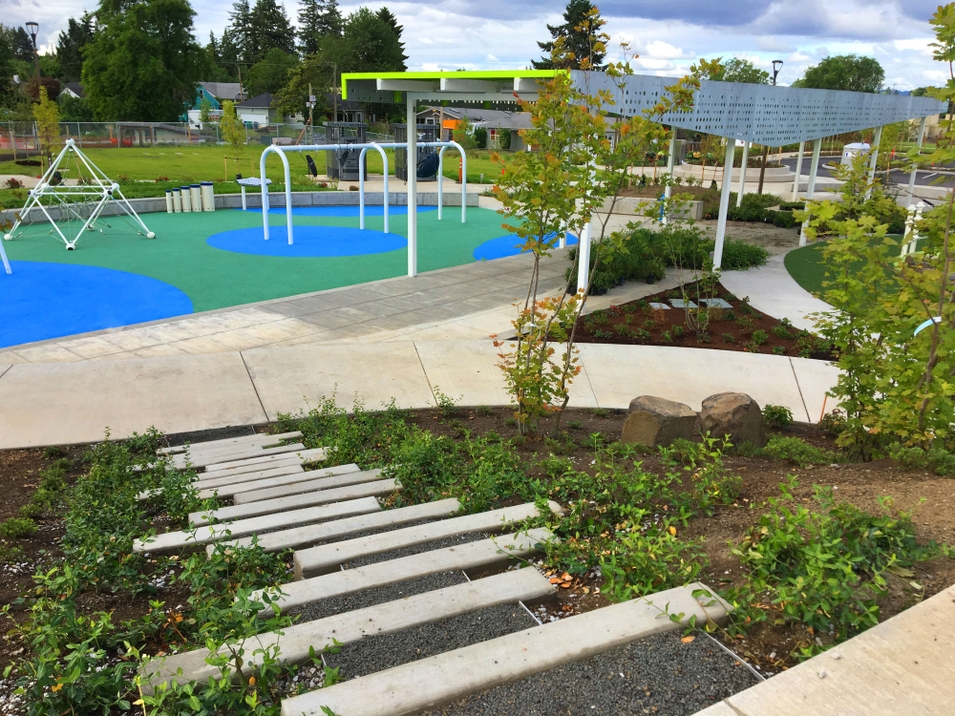 On June 9, Portland got a look at Regence’s float in the 2018 Grand Floral Parade. Titled “Play Happy Park,” the float depicted cute animals engaging in fun park activities. The float earned the Grand Marshall Award for the best depiction of whimsy, but there’s more to the story than just a giant raccoon and bunny going up and down on a teeter-totter.

The story started 18 years ago when Portland Parks acquired a 25-acre landfill that would eventually become Cully Park. But that didn’t happen overnight.

We’re thrilled to be the recipient of the Grand Marshal’s Award at the #grandfloralparade. Thanks @PDXRoseFestival! See our Play Happy float? Give us a wave! 👋🏻 pic.twitter.com/jECB0dE6pJ

A neighborhood in need of a park

The Cully neighborhood in Northeast Portland is one of the city’s most diverse—home to a large youth population, numerous low-income housing units and a wide-ranging demographic.

It’s also perhaps the most neglected when it comes to green spaces. So, when a former landfill came up for sale, the city jumped at the opportunity to transform it into something special.

Coming together to support a common goal

Portland Parks went to work and drafted a plan for completion in 2008. Adequate funding, however, kept that plan from becoming a reality. Not wanting to see the project die, Verde, a local nonprofit, stepped in to help lead a community campaign to fund the park.

A passionate coalition of local volunteers and organizations—including the Native American Youth and Family Center, Hacienda CDC, Cully Association of Neighbors and Habitat for Humanity-Portland Metro East— emerged. Over the years, these diverse Portlanders worked together to design and construct a space that truly reflects the values of the neighborhood.

These efforts paid off, and the newly-completed Cully Park will open to the public in the summer of 2018.

Where Regence comes in

Cully Park perfectly embodies the community values that Regence BlueCross BlueShield of Oregon lives by. That’s why we jumped at the opportunity to sponsor a series of fitness stations around the park’s one-and-a-half-mile paved track. Each station includes simple exercise instructions and the equipment needed to perform the exercise. The result is a free, easy, and accessible way for community members to build their strength and fitness.

We’re so excited that Portland can add to the city’s green spaces in a neighborhood that desperately needed one. And when people are enjoying the park, they’ll be reminded to live healthy and happy.

Regence’s float in this year’s Grand Floral Parade was a celebration of all the dedicated people who helped make Cully Park a success, and for the entire Cully community that finally has a park to call their own.

Over-the-counter COVID-19 testing coverage: What you need to know

Access to COVID-19 testing is a critical component of public health and safety, enabling our members to navigate the pandemic. Through new guidance issued by the federal government public health emergency, Regence will cover the cost of a diagnostic over-the-counter (OTC) COVID-19 test with no provider prescription required, beginning Jan. 15, 2022.