Regence celebrates the ‘legacy we share’ with the city of Tacoma 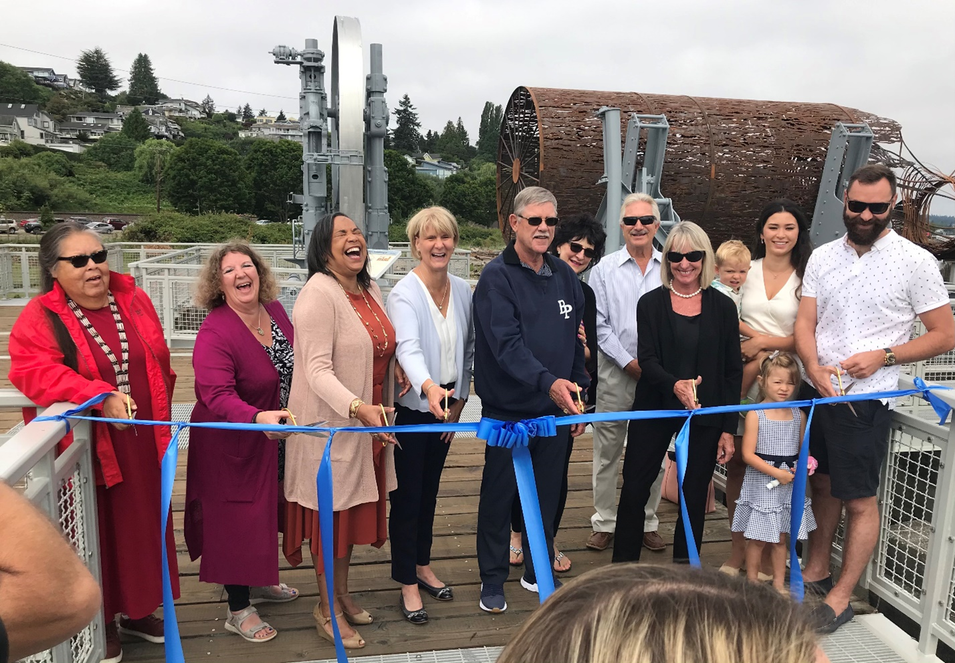 Regence BlueShield leaders joined Metro Parks Tacoma officials and other community leaders this month for a celebration of the newly restored head saw and “Ghost Log” sculpture at Dickman Mill Park on the Tacoma waterfront.

The project dedication was many years in the making. Metro Parks Tacoma had long sought to restore the historic head saw from the Dickman Mill that operated at the site until 1977. And decades later, Regence’s parent company stepped in with the $2.9 million gift to make the project a reality.

Regence BlueShield President Claire Verity told the crowd at the July 10 dedication that the project was intended to honor the shared, intertwined history between the city of Tacoma, Regence BlueShield and the local timber industry. At the same time the Dickman Mill was one of the busiest mills on the Tacoma waterfront in the early 1900s, timber workers in the city founded one of the first employer-paid health insurance companies in the country, now known as Regence.

“We are proud of the legacy we share with the city of Tacoma, and the storied past connected to the timber mills of this community,” Verity said. “And like the city, we look forward to building on our legacy.”

Tacoma Mayor Victoria Woodards appreciated that Regence isn’t just one of Tacoma’s oldest and largest employers (with 600 employees) but that it invests in the community.

“The grant from Regence’s parent company to support the Dickman Mill Park expansion is the latest chapter in Regence’s commitment to the health and well-being of this community,” Mayor Woodards said. “We are incredibly grateful, as I’ve said 100 times this morning, that Regence shares the commitment of the city and Metro Parks to honor local history while also looking for a brighter future.”

Regence leaders also connected with members of the Puyallup Tribe and the Dickman family at the dedication.

“Generations will now be able to learn about the history of this land not just from the restored head saw reflecting so many decades of the Dickman Mill, but also the beautiful “Ghost Log” sculpture telling the story of the millworkers and the Puyallup Tribe who were here on this land long before all of us were here,” Verity said in her remarks.