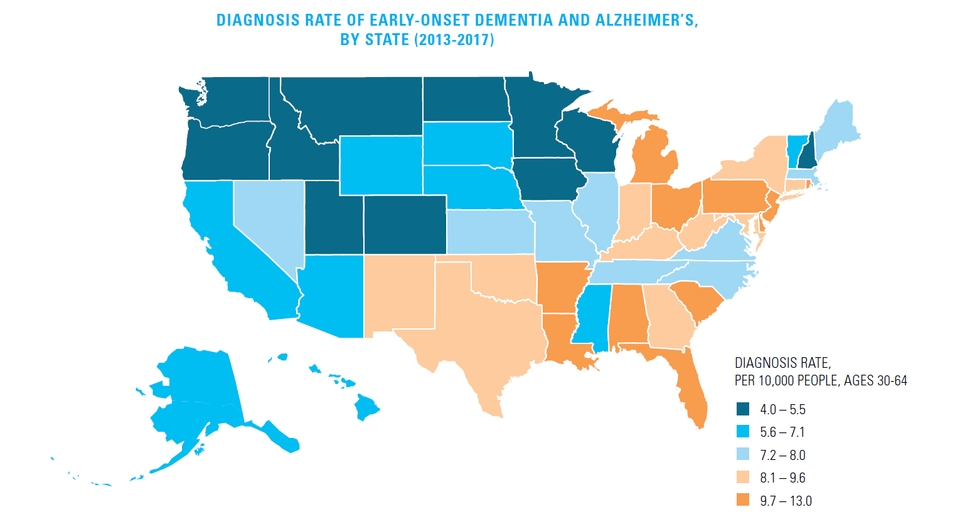 Diagnosis rates rose sharply from 2013 to 2017, according to new data from the Blue Cross Blue Shield Association (BCBSA) this week.

Alzheimer’s and early onset dementia diagnosis rates have increased at an alarming rate, particularly for Americans age 30 to 64, according to a new Health of America report released by the Blue Cross Blue Shield Association (BCBSA) this week.

The report pulled data from the BCBS Health Index—a database of medical claims from more than 48 million commercially insured members of Blue Cross and Blue Shield (BCBS) companies—and compared diagnosis rates of early onset dementia and Alzheimer’s disease between 2013 and 2017.

Most strikingly, the number of Americans age 30 to 44 diagnosed with these memory-affecting diseases increased by 373% during this time period.

Additional findings from the report include:

Supporting a growing cohort of caregivers

Earlier this month, a study conducted by Cambia Health Solutions* found that nearly 100 million Americans are providing some kind of care for a loved one. According to the study, 36 percent of caregivers are between the ages of 18 to 34 and over 50 percent carry the additional responsibility of full or part-time employment.

Through our Personalized Care Support, we are helping to reduce the burden on caregivers. Serving members across our four-state footprint—Washington, Idaho, Utah and Oregon—this program provides reimbursement for advanced care planning, home health care, psycho-social support and personalized case management from nurses who specialize in palliative care. These services are available to caregivers, too, whether they’re Regence members, or not; there is no increase in member premium and no enrollment necessary. Members are encouraged to review their benefits and learn more about the program.